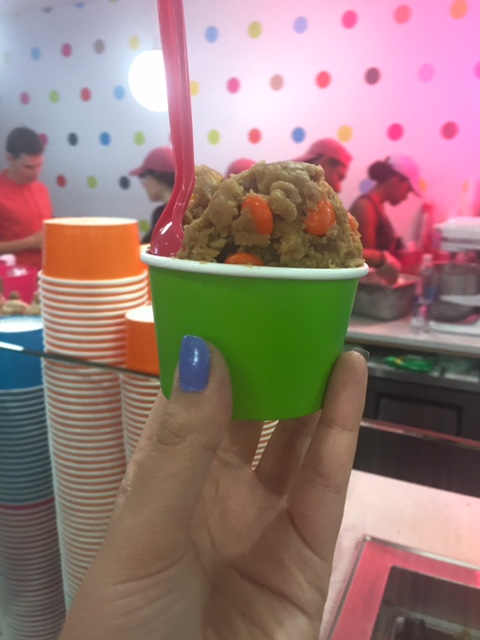 Doughn’t You Want Me, Baby?

Well, ladies and gentleman, it FINALLY happened. After not one, not two, but THREE separate attempts (read briefly about my first attempt here), I finally made it to the faddiest-fad to pop-up on this side of town since the cupcake craze of 2011 and the froyo epidemic of 2006: Cookie DŌ NYC.

I had heard about DŌ before they even opened their doors and knew that it needed to be immediately bumped up to the top of my must-try list. Why, you may ask? Because I am the girl that wanted to “bake cookies” just for the excuse to dip a spoon into the raw dough while nobody else was looking. I was the girl that definitely took that recipe “Yield: 48” down to a “Yield: 36”. Behind Reese’s cups/anything peanut butter (but only slightly!) is cookie dough ice cream. I knew I had to get my hands on a cup and see what the hype was all about.

The first time I went, nearer to their store opening, I had to wait in a line that literally went past the store by three NYC blocks. I waited for three hours before giving up at the HALFWAY point. The second time I went, the line was marginally better – or so I thought. They had simply relocated it to the other side of the street, and had one poor employee who probably drew the short straw directing customers into the shop on an as-space-opens basis. This third, last, and most magical time, my fellow blogger friend (and recently reconnected high school buddy!) Alyssa Marie over at Always Alyssa Marie and I waltzed right in to the brightly illuminated shop with hardly a wait at all. 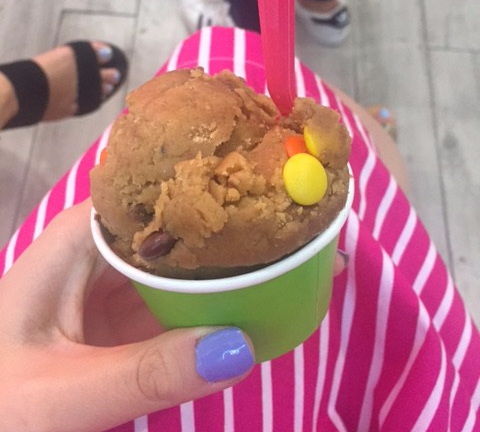 OH. EM. GEE. I may be a writer, but in this instance – words failed to describe how mouth-wateringly, sinfully delicious it was.

This was absolutely worth the hype, the wait, and the previous two failed attempts. I feel like it’s not really necessary to go into why cookie dough tastes so good – it tastes so good because it’s awesome! – but I think that part of the reason why it’s such a fun/delicious experience is because it’s kind of…forbidden. Like, when you’re trying to sneak a bite out of the bowl and your mom tells you to knock it off because raw eggs and salmonella and all that. The best part of DŌ is that it’s totally safe to eat (as the sign tells you when you walk in) because the eggs they use to make the dough are pasteurized. Pasteurization is the process of gently heating eggs so that the bacteria (which lives on the outside part of the egg shell) gets killed, but not so hot that the eggs get cooked. In doing so, they become safe to eat raw. So while you’re enjoying delicious spoonful after spoonful of this totally mom-approved confection, you don’t have that lingering “is this going to poison me” thought in the back of your head. Win-win!

I’ll admit, it was a little strange to be holding a cup of raw dough and eating it with a spoon. It threw me off at times because I kept expecting it to be ice cream – it just looked so much like it, except that it was room temperature and never melted, and certainly didn’t have the same texture. I did really enjoy how loaded with toppings the dough was – and they certainly managed to make a nice scoop out of it. I felt like it was very fairly priced for what you got.

DŌ is a great place to take your out-of-town friend who heard about it on Yelp and begs you to take her when she comes in for her Instagram-worthy photo visit. It’s the place where you meet up with a friend who you haven’t seen in a long time and want to catch up over a unique experience. It’s a place you go to near its closing time on a weeknight – not at 3pm on a Saturday afternoon. And while it’s deliciously tempting, it’s definitely not a place you want to go all of the time, because let’s face it – even though this dough is totally safe to eat and won’t kill you with food poisoning, there are some lines of acceptability – such as becoming a regular at the cookie dough store – that just aren’t acceptable to cross.

For a fabulous in-depth review of DŌ, check out fellow NYC blogger Mary Lane’s post about her experience shortly after the cookie dough store opened over at New York Cliché!